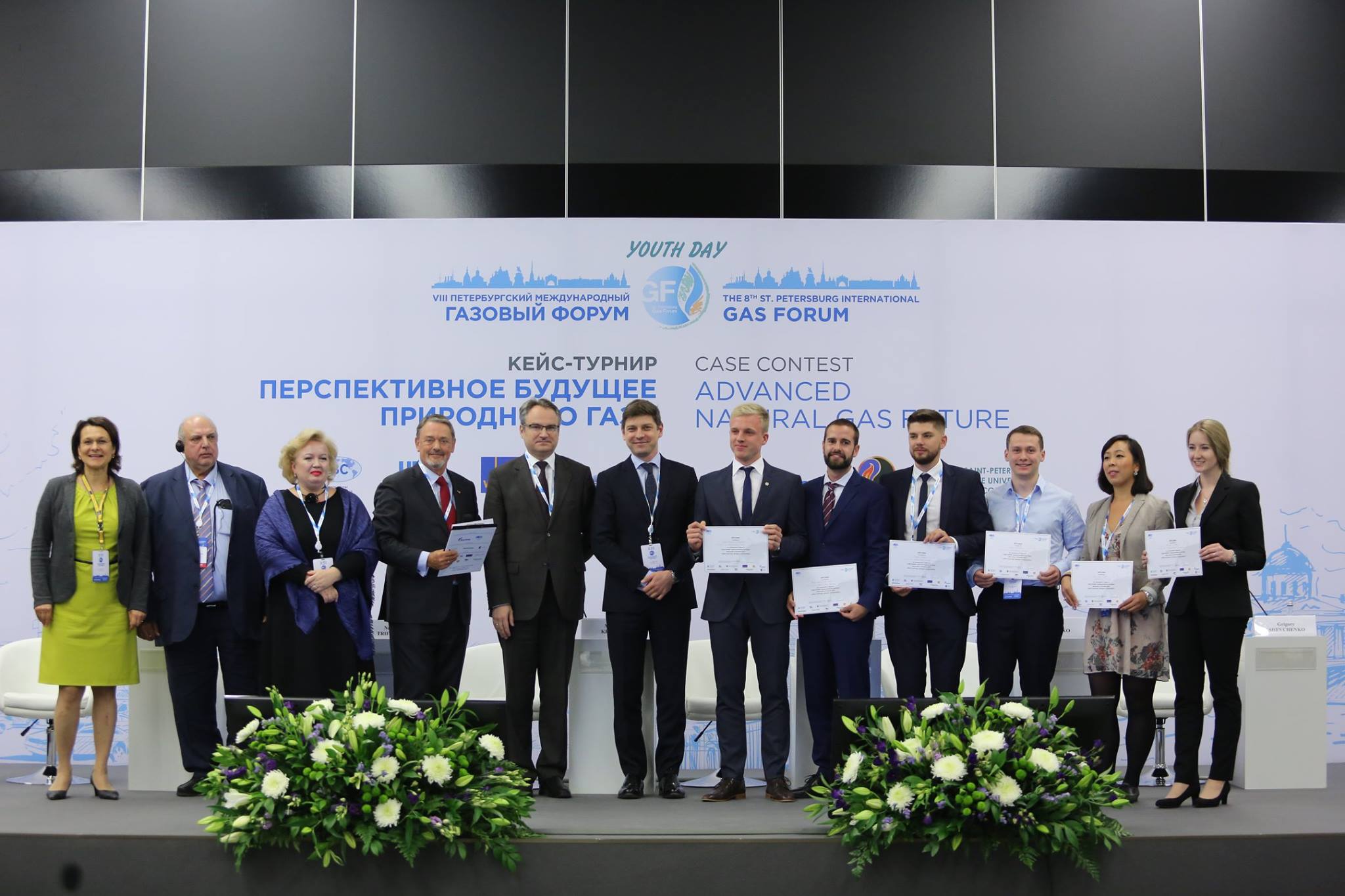 Since 2011 a group of Russian, American and European companies organize the International Saint Petersburg Gas Forum every October, parallel to the influential and even larger Energy Forum in Moscow. For the eighth year in a row, the Gas Forum offered young students from all over the world the opportunity to come to Russia, get to know Russian, European and Asian energy companies and exchange about the hot topics and great challenges of the energy world. The program consists not only of the exposition and forum, but also of different workshops, talks, events and demonstration sessions. The main event of these Youth Days of the Saint Petersburg Gas Forum is the case study contest. Six competing teams had to propose a solution-package and road-map to international companies for the successful handling of challenges of the digitalization and industry 4.0.

In order to participate at the Forum the students apply by solving a small case study which already focussed on the impact of future technology in the energy sector. The authors of the most innovative and creative case solutions are later picked and gathered into the six competition teams. The participating teams consist of six students each; the groups being national teams competing for Russia, the UK, China, the Netherlands and Germany as well as one International team with participants from Bolivia, Austria and Ukraine. This year, three students from our Master’s program – Lars, Nikita and Laszlo – succeeded in the initial case study and were incorporated in the German team. Together with three other students from the University of Duisburg-Essen, like Leipzig known for its focus on energy related topics within the financial and economic field. The contact to the group happened already two months before the actual contest started. During this time the group received a task from the representatives of the Gas Forum. In order to solve the case in the best possible way the group met in Germany – having personal meetings or video conferences.

After arriving in Saint Petersburg, checking in and meeting attendees from all over the world – the first day started with a welcoming speech by representatives from several companies and universities. The following hours were filled with games, presentations and demonstrations of diverse companies and technologies of the oil and gas sector as well as an exhibition offering insights of new developments and technical ideas to compete with futures challenges. After getting interesting impressions by others the Conference continued with the workshops. Here, the attendees were invited to choose one out of four specific topics underlining digitalization, cybersecurity and a hydrogen future. Not just the important content but also the own engagement of everybody to solve questions within a team of young professionals and experienced supervisors made the workshop a knowledge-gaining event. After the official part was over the participants had the chance to explore the beautiful city with its varieties of cultural and culinary possibilities as well as an impressive student-scene.

The focus of the second day was the case contest called “Advanced Natural Gas Future”. While the participants who did not attend the case contest were exploring the city in the night before, the german team stayed in the hotel to finalize the presentation and practise the speeches. The procedure of the contest scheduled a 10 minutes presentation for each team followed by the panel asking questions the the contestants. After the introduction of creative and forward-looking case solutions of each team the panel decided to honour the russian team as the winner of the contest. The german performance with an alternative approach of a virtuell power plant solution for one of the biggest companies in Russia also impressed the panel as much as they decided to give the second place to them.

For the last day, speeches from the highest ranked and most important leaders of the Oil and Gas industry offered insights for future businesses and challenging developments. The attendees had the chance to meet the CEOs Alexey Miller (Gazprom), Rainer Seele (OMV) and Ulf Heitmüller (VNG). The conference ended with an off-tie meeting where the attendees could ask questions to representatives of O&G companies and openly discuss movements and concerns within the branche.

Summarizing the Gas Forum all participants were grateful to experience so much in such a short time. The official events as well as the networking and unofficial meetings were optimal for gaining knowledge and having a cultural exchange with students from all over the world. The International Gas Forum happens once a year in October and we highly recommend students who have an educational focus or personal interest in this field to attend.